Thank you to all the sponsors!

Our most successful event to date! With over 700 residents attending, we couldn’t have asked for a better night! Lots of displays by various groups including the Clean Train Coalition and WHCD. The WHCD also received their Trillium Award plaque that evening from their representative and MPP Albanese. Extra special entertainment that night was from the Ontario Falconry Centre who brought birds of prey and owls for people to hold and touch. It was awesome! 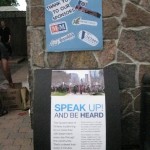 After many years of neglect, some neighbours, spearheaded by Jason Doolan, banded together to see what they could do to make the park more attractive. With a bandshell that needed a little TLC and a Cenotaph in need of repair, the LAMP group worked with Councillor Nunziata and the Parks Department to come up with some designs for a refurbished bandshell and a brand new gateway so that people walking along Weston Rd would know there is a lovely park to visit. I am proud to say that I envisioned the gateway concept and with a friend’s help, we were able to mock up how it would look and it became the model for the finished product. The City was able to add the finishing touch of a formal park sign like all others in the City have. It took a long time from first meeting to ribbon cutting but it was well worth it as we have a lovely gem of a park for our community to enjoy!!
____________________________________________________________________
The Legend comes home – 2008 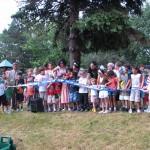 The most exciting part of the night!

This was our first time having the annual neighbourhood BBQ in Elm Park — the park was being rededicated after a major overhaul and new equipment being installed. It was a fantastic evening with hundreds of residents, the City of Toronto staff and the Councillor all coming together for a great evening of bbq, community displays by the WHCD and community spirit. It was so successful, that it made us realize that Elm Street is the perfect spot for the event and we haven’t looked back!

This entry was posted in Events - Old & New. Bookmark the permalink.